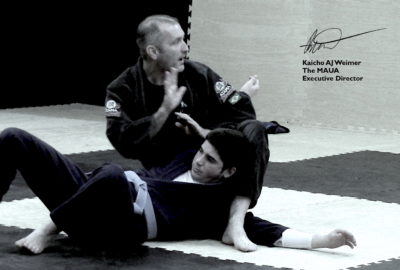 Kaicho AJ Weimer began his martial arts career at the age of 6 and later on after graduating high school, entered the military where he was part of special ordinance, communications, and chemical warfare units.  His first assignment was to a military base located in Tokyo, Japan.  During his time there A.J. became highly involved with the martial arts community by training at various schools throughout the area.  Desiring a more fast paced life, A.J. left the military to enter full-time international security operations and martial arts instruction while living in Japan as a civilian.

Wanting to continue his personal studies in Asian culture and customs, A.J. resided in Japan for almost a decade studying the Japanese language, warrior culture, and history.  During this time he earned black belts in Aikido, Jiu-Jitsu Submission Fighting, Filipino Martial Arts, and Combative Weapons along with extensive training in the Japanese sword.  In 2003, in recognition of his accomplishments, A.J. was awarded with the school title of Yoshindojo, which means the Way of Truth and Honor, and given the title of Kaicho being the head of the Martial Arts Unlimited Association

During his time in Japan, AJ began training and working extensively with international security operations traveling all over the world.  It was at this time that AJ furthered his training with various programs and courses offered by former special operations members and law enforcement.  This enabled him to gain training and certifications for urban combat and counter-surveillance tactics, I.E.D. search and recognition, communications & electronic counter-surveillance, protective and evasive driving, and counter-terrorism tactics.

AJ was working extensively with personal and executive protection for many celebrities and VVIPs around the world.  This experience gave him the opportunity to join a special civilian security company to be part of several response teams for kidnap, ransom, and extortion operations in Asia, Europe, and South America.  During his time as a security protection officer, AJ gained valuable tools that he implemented into the many programs sponsored by the association like the Security Protection Course, S.T.E.P. programs, and the popular self-defense system Total Fighting Concepts.

In order to help preserve the integrity of the many martial arts M.A.U.A. represents, A.J. also maintains current outside memberships with the following organizations: